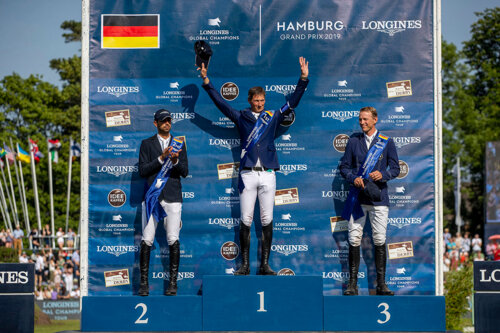 Hamburg - The show grounds in Hamburg Klein Flottbek will host the prestigious and highest-paying show jumping series, the Longines Global Champions Tour and Global Champions League from August 26 to 29, 2021. This means that the chances are very good that the newly crowned medal winners of the Tokyo Olympic Games will grace the holy turf at Derby Park.

The sporting program includes the jumping events of the five-star tour including the Longines Global Champions Tour Grand Prix of Hamburg as well as the decision of the Hamburg stop in the Global Champions League. In addition, there will be an international tour at one-star level and the international youngster series for seven- and eight-year-old show jumpers, the FUNDIS Youngster Tour. In addition, there will be a small but fine exhibition, which invites visitors to stroll around and enjoy culinary delights.

However, the tournament will not be held as the German Jumping and Dressage Derby. This event will be postponed to next year: "Unfortunately, it is not possible to hold a German Jumping and Dressage Derby worthy of the name, even in August, due to the Corona pandemic," explained Show Director Volker Wulff. "This decision was made mainly out of consideration for the many loyal and faithful Derby fans", because also this summer it will not be possible to accommodate everyone with already purchased tickets in the Derby Park. Thus, the tickets from 2020 will also retain their validity for 2022. "Then we want to celebrate the German Jumping and Dressage Derby presented by IDEE KAFFEE on the usual date and, above all, in the usual form, namely on the weekend around Ascension Day," Wulff continued.

Tickets for the Longines Global Champions Tour of Hamburg next August will be sold independently of Derby tickets.

Visit www.engarde.de for info on the event and the start of ticket sales.