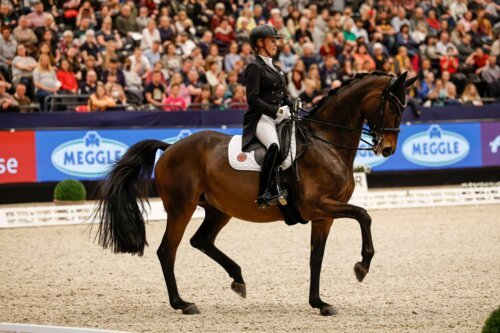 Leipzig - This FEI Dressage World Cup™ Final presented by Meggle really had everything dressage fans could wish for. An amazing freestyle by Jessica von Bredow-Werndl and her fabulous TSF Dalera BB with a score of over 90 percent. And a four-legged dressage legend celebrated one last appearance in a class of its own: Isabell Werth's Weihegold OLD.

This 35th FEI Dressage World Cup™ Final presented by Meggle was championship-worthy and simply got under the skin. Once again Jessica von Bredow-Werndl and TSF Dalera BB celebrated their La La Land freestyle. Faultless, powerful and yet light, very close to perfection and completely relaxed. Rider and horse merged into one unit - it was hard to find out what could have been better about this performance. A full 90 percent meant victory. And this final had even more to offer: Highly talented young dressage riders, forward-looking horses and then the farewell of the wonderful Weihegold OLD into sporting retirement. Immediately after her performance, an emotional Jessica von Bredow-Werndl could be seen: "It felt better today than in Tokyo - I would even say it felt better than ever," beamed the Olympic and European Champion. "It's not normal, Dalera is still developing. And it was very emotional. It will be the last tournament for us for five to six months, but after my baby break we will be back!"

Second place went to an overjoyed Cathrine Dufour (DEN) with her only ten-year-old Vamos Amigos: "It was the first World Cup Final for me and for Vamos. He was a bomb today! I am super proud of him and this result is way above what I expected!"

Isabell Werth closed the Weihegold OLD era in her career with a dynamic, top-motivated round. The pair had won the FEI Dressage World Cup™ Final three times, the last time in 2019, and now, three years and three European Championship medals later, they danced freshly to third place in Leipzig. "I am overjoyed to have been able to see off this exceptional mare at this level. She has once again shown herself in such great form here, I am very proud of her. And very grateful to the organisers and also the Leipzig audience for this great, emotional atmosphere," enthused a highly emotional Isabell Werth.

The PARTNER PFERD Sunday will start with the FUNDIS Youngster Tour, before the FEI Driving World Cup™ Final presented by Sparkasse will decide on the Driving World Cup Champion. The PARTNER PFERD, presented by Sparkasse Leipzig and Sparkassen-Finanzgruppe Sachsen 2022 ends with the decision in the Longines FEI Jumping World Cup™ Final. And then it's only nine months until it's once again: Welcome top equestrian sport at the Leipzig Trade Fair Centre from 19 to 22 January 2023.

Tickets for PARTNER PFERD are on sale at www.partner-pferd.de. Here you will also find a lot of further information about the event. Currently, the Saxon Corona Protection Ordinance no longer imposes any restrictions for events. Nevertheless, the wearing of a mask is recommended.
You can find the current info here: https://www.partner-pferd.de/de/news/ihre-sicherheit-liegt-uns-am-herzen.