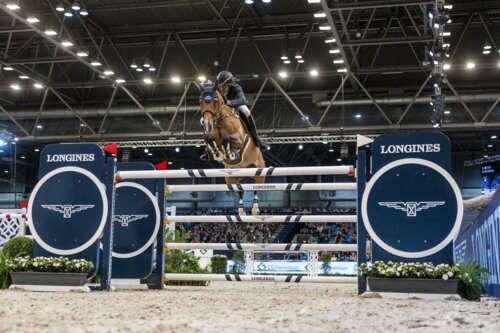 Leipzig - The golden month of October brings a special equestrian highlight every year: the start of the new World Cup season. Traditionally, the show jumpers start the Longines FEI Jumping World Cup™ in Oslo. The first top score for the ranking of the prestigious indoor series was secured by the Swiss Bryan Balsiger with the mare Dubai du Bois Pinchet. Now the Longines FEI Jumping World Cup™ goes on the road in the Western European League: The next stops are Helsinki, Lyon, Verona, Stuttgart, Madrid, La Coruña, London, Mechelen and Basel. From January 19-22, 2023, the 25th edition of PARTNER PFERD, presented by Sparkasse Leipzig and Sparkassen-Finanzgruppe Sachsen, will host the international show jumping series. And a particularly popular one at that. The reason: the unique audience and the fantastic atmosphere at the Leipziger Messe. After that, there are only three more stages, in Amsterdam, Bordeaux and Gothenburg. The final will be decided in April 2023 in Omaha (USA).
Ticket sales got off to a flying start. But anyone who still wants to be there is sure to find the seats they want. Why it is especially worthwhile to be at PARTNER PFERD this time, reveals Tournament Director Volker Wulff in an interview.

What is dominating for you right now: The memory of the exhilarating four-time World Cup Final in April within the framework of PARTNER PFERD or the anticipation of the upcoming PARTNER PFERD with its 25th anniversary?
Volker Wulff: Of course it is still wonderfully in my memory what took place in April in the Leipziger exhibition halls! It was a very special event, as the first big event after the Corona restrictions - for everyone involved.
But we are also already fully occupied with the preparations for the next PARTNER PFERD, putting all our heart and soul into it, and it should be just as wonderful as it was in the past. We are all looking forward to it very much.

During the FEI World Cup™ Finals, the stands were sold out. What is the current situation with tickets? Do you still have a chance to get your favorite seat in Hall 1?
Volker Wulff: Ticket sales have started brilliantly. This year, for the first time, we have the situation that you can buy tickets not only through Eventim and the Leipziger Ticketgalerie, but also directly through Leipziger Messe. There were a few coordination problems at the beginning, but everything has been restored in the meantime. Tickets are still available on all days and in all areas, so we can basically still offer all the seats you want.

It is the 25th anniversary of PARTNER PFERD. How will this be celebrated? What can visitors look forward to?
Volker Wulff: It will be a great birthday! We will certainly have the top equestrian athletes from Europe as guests in the jumping saddle, on the carriage and in the vaulting ring. We are already working on a special anniversary show and are looking forward to celebrating the 25th PARTNER PFERD with the fantastic Leipzig audience.

25 years of PARTNER PFERD is also a good time to take a look back. How do you assess the impact of the tournament on the city of Leipzig and the State of Saxony?
Volker Wulff: With the last event, we saw how important PARTNER PFERD has become for the city of Leipzig and the entire State of Saxony. Together with the Leipzig Graduate School of Management, we have had a survey carried out which proves this excellently. It is also thanks to the audience and all the people around the event that we have been able to establish such a great event at the Leipziger Messe over the past 24 years, which Leipzig, Saxony and the neighboring federal states can no longer be imagined without.

Tickets for the anniversary edition of PARTNER PFERD from January 19 - 22, 2023 are available at www.eventim.de, www.ticketgalerie.de and via www.partner-pferd.de in the online ticket store of Leipziger Messe.