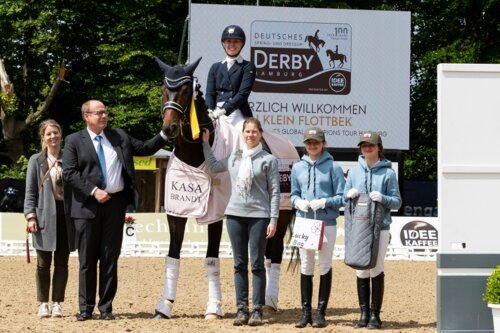 Hamburg - Two Derby winners again celebrated successes in the Anrecht-Investment Dressage Arena at the German Jumping and Dressage Derby. The 2018 Derby winner, Emma Kanerva (FIN) won the Grand Prix Special in the Prize of the Helenenhof, Schwiebert family, with her talented young prospect Feldrose FRH, ahead of Hendrik Lochthowe with Bricco Barone and Felix Kneese with San Simeon. "It was only her second Special and also only her second international show," Kanerva explained. "She did great and was with me the whole time. She's not that experienced yet, but she's a really great horse."
On Saturday evening, the Grand Prix Freestyle, sponsored by Freiherr von Jenisch, is traditionally on the Hamburg dressage programme. Kathleen Kröncke won here with San Royal. Incidentally, the pair was also victorious in this competition in 2018 - at that time it was the first freestyle for the impressive dark bay. Although she was beaten in the Grand Prix by Frederic Wandres with Hot Hit OLD, she turned the ranking around in the freestyle to music: "San Royal loves freestyle. The fuller the stadium and the louder the music, the better he gets. He loves it, even when the people clap then," Kröncke beamed. Carina Scholz came third with Du Ciel.

In the freestyle, the Anrecht-Investment Harmony & Fairness Prize was also awarded - by the audience! The audience could vote for their favourite via the website We-Judge.com - a real audience award. And the prize went to Elisa Prigge with her Dark Dancer, who also took fourth place in the freestyle.

U25 Dressage Derby with a forward-looking final
Three extremely likeable and talented young riders met in the Anrecht-Investment Dressage Arena for the final of the U25 Dressage Derby in the KASA Brandt Prize. The Derby victory went to Alina Schrader ahead of Lilli Richter and Vivien Koecher. "I was actually calmer today than in the qualification. I could only come third in the worst case," Schrader laughed. "I had nothing to lose, I could only try to get involved with the horses and feel what was going on." And a lot was possible - namely a Derby victory.

Vivien Koecher's Reine Freude emerged from the competition as the best horse: "I am bursting with pride. We've had the horse from foal on and worked our way up from A-level dressage to the junior squad. I didn't know how she would go with the other riders, but she reached out to them as much as she does to me."

The box office will also be open on the final day of the Derby and standing room tickets are still available. Tickets are also already on sale at Derby Square for 2023 - when it's Derby time again from 17-21 May.