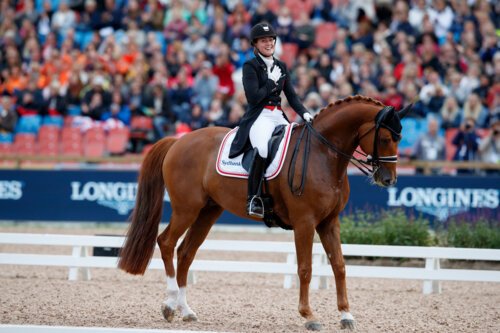 Leipzig - The elegant riders in tailcoats and leather boots have started their World Cup. The Western Europe League kicked off in Herning, Denmark. There, the Danish dressage star Catherine Dufour with her proven Atterupgaards Cassidy took full advantage of the home advantage and the routine of her all-time partner. The pair won the Grand Prix Freestyle and thus landed the top score in the ranking of the FEI Dressage World Cup. This marks a big step towards the final at PARTNER PFERD, presented by Sparkasse Leipzig and Sparkassen-Finanzgruppe Sachsen, from April 6 to 10, 2022.

She was already successful with him in the junior tour: Atterupgaard's Cassidy even paved the way for Catherine Dufour to become a world-class rider, and even at the age of 18 she is not a bit old-fashioned. The Danish champion rider and the chestnut gelding know each other inside out and played their aces to the full in Herning. Victory in the qualifying Grand Prix and in the points-scoring Freestyle - a clear run.

In the Western Europe League, the FEI Dressage World Cup is criss-crossing Europe: From Herning in the north, it goes to Lyon (FRA) and then even further south to the Spanish capital Madrid. In mid-December, the best dressage riders will meet in London before heading to Mechelen, Belgium, over the Christmas holidays. At the end of January, points for the World Cup ranking will be awarded in Amsterdam (NED), before Neumünster in the north of Germany beckons in mid-February. The last chances for World Cup points will be in Gothenburg (SWE) and `s-Hertogenbosch (NED). And then it will be clear who will be allowed to take part in the glamorous final in Leipzig from April 6 to 10, 2022.

One thing is already clear, it will not be just any final, it will be - as already in 2011 in Leipzig - a multi-final with all World Cup disciplines in equestrian sport. All FEI World Cup Finals will be celebrated in the spring of 2022 at the Leipzig Exhibition Center: show jumping, dressage, driving, vaulting.

Tickets will be sold via www.partner-pferd.de. Here you can also get a lot more info about the event.