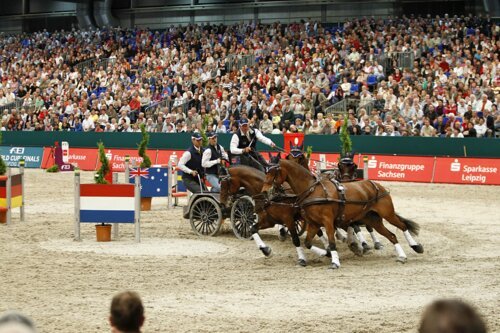 Leipzig - There are plenty of World Cup points up for grabs this weekend in Lyon, France. Both the show jumpers and the dressage riders want to work their way up in the rankings. For the drivers, on the other hand, Lyon is the first leg of the indoor season of the FEI Driving World Cup, which will end with the finals at PARTNER PFERD, presented by Sparkasse Leipzig and Sparkassen-Finanzgruppe Sachsen, from April 6 to 10, 2022.

The starting point for the indoor season of the FEI Driving World Cup is Lyon (FRA). The who's who of the driving sport already meets there: among others, multi-champion Boyd Exell (AUS), Koos de Ronde (NED), Glenn Geerts (NED) and Jérôme Voutaz (SUI) meet Mareike Harm, who represents the German colors. At the end of November, the 4-horse drivers will meet in Stockholm, Sweden, and in mid-December in Geneva (SUI). The last two stops of 2021 will be held in London (GBR) and Mechelen (BEL). New year, new luck then applies to only one stop, namely in Bordeaux (FRA). And then it will be decided who can take part in the glittering final in Leipzig from April 6 to 10, 2022.

One thing is already clear, it will not be just any final, it will be - as already in 2011 in Leipzig - a multi-final with all World Cup disciplines in equestrian sport. All FEI World Cup Finals will be celebrated in the spring of 2022 at the Leipzig Exhibition Center: show jumping, dressage, driving, vaulting.

Tickets will be sold via www.partner-pferd.de. Here you can also get a lot more info about the event.