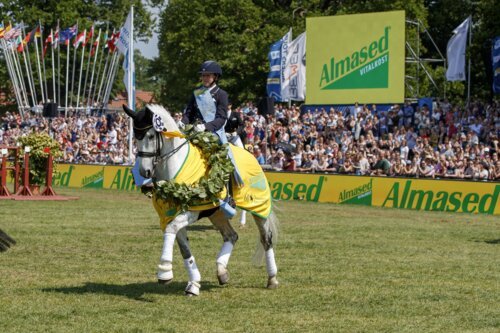 Hamburg - Emma Kanerva is one of the most successful dressage exports of her Finnish homeland. The likeable dressage rider worked for many years as the first rider in the stable of riding master Hubertus Schmidt and settled near Hamburg a few years ago. In Stade she runs a tournament stable - and with success. Olympic Games, European Championships and Nations' Cups are part of the 36-year-old's show schedule. After her three-year break from the Derby, she was eager to compete again in Klein Flottbek and ride into the Anrecht Investment Dressage Stadium. Emma Kanerva is looking forward to finally having horses in the Derby Park again.

What do you prefer?
Dog or cat? Dog
Mountain or beach? both
Thriller or comedy? Comedy
Soul or rock'n'roll? Soul
French fries or raw vegetables? Fries
Couch or funfair? Funfair

How would you describe yourself? Calm, loving, determined

What are you proud of? Of the horses I have trained. Of the success I have had and of my participation in the Olympic Games in London.

Where do you get the motivation for top equestrian sport?
Every day is new, the horses are different and I just have so much fun working with them. And I enjoy accompanying their development. If you are successful, that is of course also a great motivation.

Who is your idol or role model?
Kira Kirklund, as a Finnish rider she was very successful. And also my first trainer in Finland: Ritta Holopainen.

If you could choose one horse of your competitors, which would it be?
I think Valegro - it always looked so easy with him and Charlotte Dujardin and he is just my type of horse.

Which is your soul horse and why?
That is Sini Spirit, my Olympic horse from London. We had many ups and downs and then to make it to London was great. I had him for many years, he was the first horse I trained up to Grand Prix. He was a very special horse for me!

How do you remember your Derby win in 2018?
The horse change was very exciting and the first time for me. I didn't think I would make it to the final either. At first I really had a bit of respect, whether it would all look good in the arena with the foreign horses. But then it was a lot of fun and worked very well. It was also very interesting to see how the others rode my horse - I watched it in detail afterwards on ClipMyHorse.TV.

How are you planning your start in Hamburg?
I have entered my young horse for Hamburg, Feldrose. She is still quite inexperienced, but I really wanted to ride in Hamburg again. With my top horses I will be at the Nations' Cup the weekend before - going straight from there to Hamburg would have been too much. Feldrose is still at the beginning of her career and only ten years old, but is already doing very well. I am curious to see how she presents herself in Klein Flottbek.

What do you particularly like about the Derby?
I like to walk through the show and enjoy the atmosphere. And I also like to watch jumping, if it suits me, I also watch the jumping derby. The Derby Park is simply super and a tournament in the middle of Hamburg, that is something special.

Tickets from 2020 remain valid for 2022, and there are still remaining tickets for almost all parts of the event. Information about the tournament classic in Hamburg Klein Flottbek on the internet:
www.hamburgderby.de. The ticket telephone can be reached at 01805 - 119 115.
(Monday to Friday from 09.00 to 13.00).