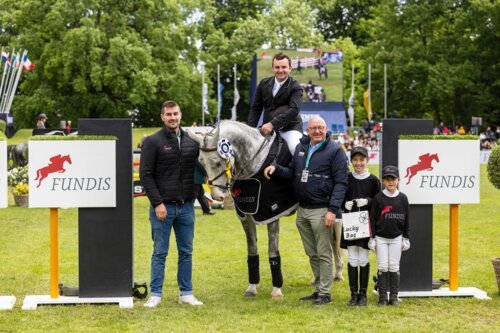 The second stop of the FUNDIS Youngster Tour made a stop on the hallowed turf of the legendary German Show Jumping and Dressage Derby in Hamburg-Klein Flottbek. Plenty of space for galloping is offered by the magnificent grass arena and the unique atmosphere of the tournament classic, which attracts well over 90,000 visitors to the Derby Park during the tournament week. It was a completely new experience for the up-and-coming show jumping talents under the saddles of the top international riders. Two tests were scheduled for the seven- and eight-year-old show jumpers in Hamburg, from which an overall result was determined that decided on the points awarded for the ranking.

CBI Karhari by Goodluck Vdl under the saddle of the Irish Jonathan Gordon secured the top score for the ranking in the seven-year-old class. The pair had won both competitions of the FUNDIS Youngster Tour in Klein Flottbek. As second of the Hamburg leg, the Holsteiner London son Cadent also collected a lot of points for the overall ranking with Jesse Luther. Third place went to Cashtender, also a Holsteiner by Casall with Frederic Tillmann in the saddle.

In the eight-year-old division, Calvin FP Z delivered the best performance on the Derby course. Ridden by Linda Heed, the Calvados Z son delivered consistent rounds in both competitions and placed twice, which secured the top score for the ranking. No less than three horses jumped to second place overall after the summary of the two competitions: Medarco by Messenger ridden by Philip Rüping, the Kannan son Loui under Daniel Deußer and Origi by Vosberg by Echo van't Spieveld with the successful Belgian rider Niels Bruynseels.

About Fundis Reitsport
Fundis Reitsport GmbH is based in Ilshofen, Baden-Württemberg. The company was founded by Stefan Fundis out of his childhood bedroom. He had the idea for the company at the age of 14 and put it into practice with the help of his horse and equestrian sports-loving family. And so, with a lot of passion and hard work, the business model established itself as a valued and proven online shop for horses and riders. The heart of Fundis Reitsport GmbH is the online shop, which offers a first-class selection of high-quality products from well-known manufacturers. Whether well-known classics, practical everyday helpers or the latest and most innovative trends - the wide range of products makes every rider's heart beat faster. In addition to the selected premium range, the name Fundis Reitsport stands for personal service, expert advice and an uncomplicated and convenient shopping experience from home or on the road.

The next stop of the FUNDIS Youngster Tour is the OWL Challenge from 8 to 11 September 2022 at the Paderborn Schützenplatz.

Since the 2021 season, the ranking has been based on the horses' successes.