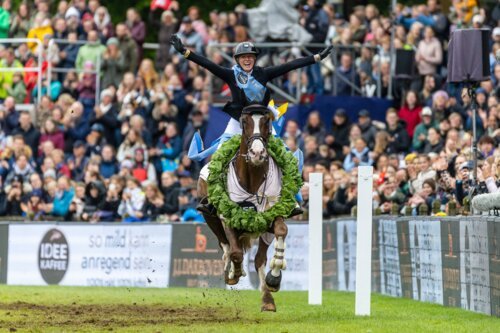 Hamburg - This has not happened since 1975: A woman winning the German Jumping Derby presented by IDEE KAFFEE. Absolutely overwhelmed, overjoyed and also a little stunned, Cassandra Orschel stood in the entry as congratulations poured in from all sides. With the eleven-year-old Holsteiner Dacara E, she only had one jumping fault in the round and had competed with three other riders with four faults in the jump-off.

There she met the European Champion and three-time Derby winner André Thieme with Contadur, who delivered the fastest time, but had to accept two jumping faults at high risk. Second place went to Frederic Tillmann - brother of Derby winner Gilbert Tillmann - with the only eight-year-old Comanche v. In fourth place Sandra Auffarth achieved another great result with Nupafeed's La Vista - as always in an excellent style, which was rewarded with a special prize, the Anrecht-Investment Stil Preis. A prize, by the way, that was determined by spectator voting.

Now Cassandra Orschel, who was born in Hamburg but competes for Poland because her mother is Polish, joins the ranks of the Derby winners - and more: the Derby winners. So far, only four women have achieved this in the more than 100-year history of the Derby: Irmgard von Opel in 1934, Käthe Schmidt-Metzger in 1949, the British Marion Mould in 1970 and her compatriot Caroline Bradley in 1975. "When it's your first time at the Derby and you get to ride in front of a crowd like that, you're happy with a round like that - no matter what the result," beamed 29-year-old Cassandra Orschel, still in disbelief at the blue Derby winner's ribbon draped over her shoulders. A Hamburg rider winning the Derby in Klein Flottbek with a Holstein mare - a North German fairytale has come true.

At the age of five, Dacara E moved to Cassandra Orschel's stable via the Holsteiner auction, but she proved difficult at first: "But I fell in love with her anyway and wanted to have her at all costs," Orschel recalls. "I then carefully built her up and trained her. I actually wanted to ride another horse here, but in training it turned out that Dacara E solves these tasks 'with her finger in her nose'," Orschel laughs, "and so I really wanted to try it here - as a Hamburger at the Derby."

Frederic Tillmann was somewhat surprised by his second place: "Comanche is very inexperienced. It was a bit risky to start with him here, but he has a super attitude, a lot of ability, is very well-behaved and wants to do everything right. He showed that today and I am very proud of him."

André Thieme was very close to a clear round in the round, which could have meant the fourth Derby victory for him. But an uncertainty at the bush oxer shattered this dream: "Contadur is a great, careful horse - but at this one jump his quality and caution unfortunately got in his way a bit. The rest of the course he fought like a lion and really tore himself apart for me. There's only one thing that helps: more practice!" He is an ambitious person and definitely wants to keep at it. Sounds like a reunion in the derby.

Three other gentlemen were overjoyed with how the 2022 German Jumping and Dressage Derby went. Albert Darboven was very pleased "that a young lady has finally won. I liked her ride very much and I liked her horse very much," was the significant praise.

Hamburg's Senator for Sport and the Interior, Andy Grote, had himself escorted the winner into the arena on horseback and enjoyed the atmosphere in Klein Flottbek very much: "I am happy that the Derby has started again, that it was full here, that we had this atmosphere, that everyone was enthusiastic," he enthused. "As a sports senator, that really gets your heart pumping. When we saw how full it was here - that was already a statement that as a Hamburger you don't let the weather stop you because it is simply a sensational event. I thought it was great!"

Around 90,000 spectators found their way to Derby Park after the corona-related cancellations of 2020 and 2021 - and that despite the weather being anything but inviting. "It's basically something that makes me very happy," said Derby boss Volker Wulff. "I've never seen the derby so rainy, but the Hamburgers still come. We have almost as many spectators as in 2019, when we had very nice weather. That shows that people come for the derby - that's great, of course."

Cassandra Orschel also had to say a big "Thank you, Hamburg!": "Simply that I was allowed to ride here in front of this backdrop, that my family and my friends were here, who were cheering along, who were always on the spot and also knew exactly when they had to leave me alone sometimes - I simply thank everyone who was allowed to experience this day with me today," beamed an emotional Derby winner.

The next German Show Jumping and Dressage Derby will take place from 17 to 21 May 2023 and tickets can be booked now. The ticket telephone is available on 01805 - 119 115. (Monday to Friday from 09.00 to 13.00).
Information about the tournament classic in Hamburg Klein Flottbek on the internet: www.hamburgderby.de
Instagram: @germanjumpinganddressagederby
Facebook: German Show Jumping and Dressage Derby Hamburg (@hamburgderby).
(SySa/EquiWords)