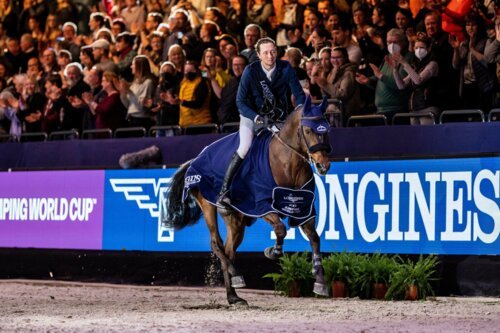 Leipzig - The Longines FEI World Cup™ Final in Leipzig was exciting until the very last rider. In front of sold-out crowds at the PARTNER PFERD, presented by the Sparkasse Leipzig and the Sparkassen-Finanzgruppe Sachsen. In the end, Martin Fuchs (SUI) was cheered as the winner.

After three rounds it was sealed: The winner of the Longines FEI World Cup™ Final is Martin Fuchs and comes from Switzerland. And the winner was really only decided with the last round in the course. Before that, some of the favourites had shown small weaknesses and made slight mistakes.

With his top horse Chaplin, he had made it onto the podium in the time trial on Thursday, delivered a solid result with The Sinner in the second final competition on Friday and secured the overall victory in the final, again in the saddle of Chaplin, with a double clear round. Second place went to Harry Smolders (NED) with Monaco. Third on the podium was Jens Fredricson (SWE), brother of the Team Olympic Champion and Vice European Champion with the team Peder Fredricson, with Markan Cosmopolit.

"I had a perfect plan to split the final between two horses," Martin Fuchs explained. "On Friday after the mistake I had doubts for a moment, but today with the two clear rounds it was a dream come true to win this prestigious title." He said Chaplin was his heart's horse because he was an incredible fighter and had the biggest heart. "By the way, this year he has his first foal crop and it is so great to get all the foal pictures," Fuchs enthused.

Harry Smolders was also absolutely pleased, as it was the first championship for his horse Monaco, "and I don't think it was his last." Jens Fredricson also raved about his horse: "He is great and is in very good form. I came here with great expectations and I am overjoyed with the third place. I enjoyed every second here."

The final jumping competition was won by David Will, who still secured sixth place overall as the best German thanks to those last super rounds with C Four.
"I am now really looking forward to the next PARTNER PFERD, then again as FEI World Cup™ Qualifier - at least with three disciplines, maybe with four," announced Show Director Volker Wulff.

The next PARTNER PFERD, presented by Sparkasse Leipzig and Sparkassen-Finanzgruppe Sachsen, is only nine months away. Then it will be: Welcome to top equestrian sport at the Leipzig Trade Fair Centre from 19 to 22 January 2023. You can find more information at www.partner-pferd.de .